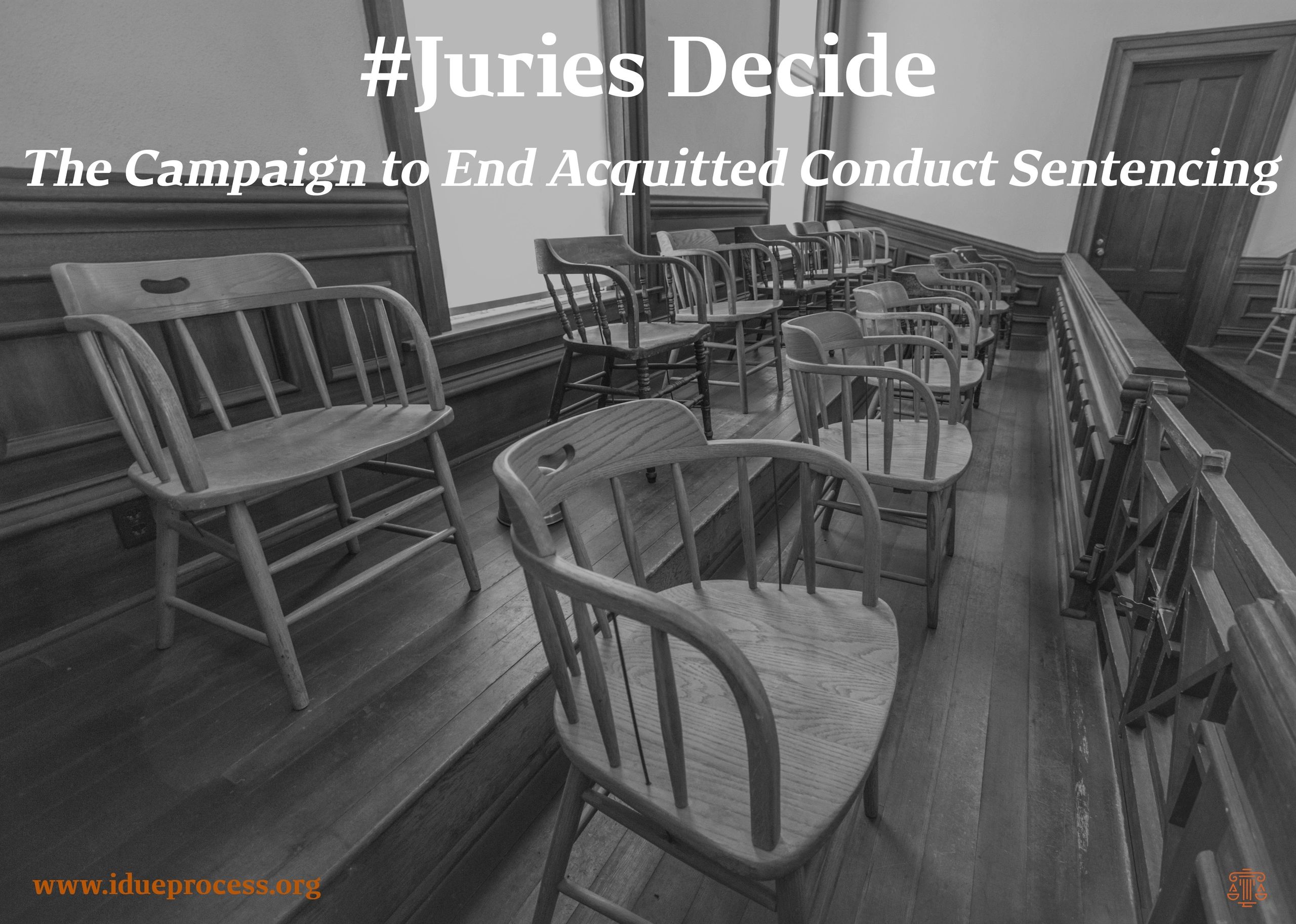 How is it that a jury can find a person accused of a crime "not guilty" but that same defendant can be sentenced for that crime anyway?

This is the problem of acquitted conduct sentencing--an unconstitutional practice Due Process Institute is working to abolish.

What is Acquitted Conduct Sentencing?

“Acquitted conduct sentencing” is a practice that allows federal judges to sentence defendants based on charges for which a jury found them to be not guilty. It is a flagrant violation of numerous due process rights enumerated in the Constitution. Jurists across the ideological spectrum—from the late Justice Scalia to Justice Ginsburg—have condemned the practice for many years, but the Supreme Court has repeatedly failed to accept an appeal that would review the constitutionality of the practice.

We urge legislators on both sides of the aisle to bring this unfair and unconstitutional practice to an end before more Americans are sentenced to decades in a prison cell on the basis of unproven allegations that juries have heard and purposefully rejected.

Due Process Institute is grateful to work with many diverse allies who support the #JuriesDecide campaign as part of our bipartisan coalition as well as through their own efforts!

What do Justices Scalia, Stevens, Ginsburg, Thomas, Gorsuch, Kavanaugh, and a DC juror have in common?

What We Are Doing to End Acquitted Conduct Sentencing

Due Process Institute is working with a bipartisan coalition and members of Congress to pass legislation that would ensure #JuriesDecide.

The full impact of acquitted conduct sentencing is unknown given the limited data and awareness about this practice. Due Process Institute is seeking to provide a comprehensive picture of this practice through research.

Criminal justice reform news website "The Appeal" covered the issue of acquitted conduct sentencing, explaining the practice, why it's wrong, and the latest news about the bill Due Process Institute is supporting.

"Although this is a problem that will come as news to some, it is the rare one that can (and might) be remedied."

Robert Ehrlich, former governor of Maryland, writes in Law360 that acquitted conduct sentencing is wrong and that federal law is in need of serious reform.

"The bottom line: Acquitted-conduct sentencing effectively divests individuals of their Sixth Amendment right to trial-by-jury by divesting citizens of their historical and constitutional role in the administration of criminal justice. "

Writing in the Washington Times, editor David Keene says that acquitted conduct sentencing "throws out the guarantee that a defendant is to be judged by a 'jury of one’s peers,' makes a mockery of jury trials and the 'beyond a reasonable doubt' standard to which the prosecution is supposedly held in criminal cases."

Due Process Institute applauds Senators Durbin and Grassley for once again serving as lead sponsors of a landmark bipartisan criminal justice reform bill--as well as co-sponsors Senators Leahy, Lee, Booker, and Tillis--and putting their political differences aside to work together for the good of the country by introducing--the Prohibiting Punishment of Acquitted Conduct Act of 2019 (S. 2566).

We are grateful for the support of many allies in endorsing this legislation!

Our Work In the Courts to Abolish the Practice

Brief in Support of Certiorari

Brief in Support of Certiorari

Forty states and the District of Columbia either explicitly or implicitly permit the use of acquitted conduct at sentencing.

The method of prohibition varies. Georgia, Hawaii, Massachusetts, Michigan, New Hampshire, and North Carolina eliminated the practice via court decision; Minnesota, New Mexico, Oregon, and Washington did so via statutory or regulatory sentencing guidelines. The effect of the prohibitions in these ten states also varies depending on the particular sentencing regime the state employs.

To understand the difficulty that will come with reforming the use of acquitted conduct sentencing at the state level, one needs to understand the various sentencing mechanisms used in the states since they feature substantial variations in both procedure and substance.

Stay tuned for our comprehensive report!

Please note: contributions or gifts to Due Process Institute, which is operated as a 501(c)(4), are not deductible for federal tax purposes.